As you might expect, the capital of Texas offers some Texas-sized shopping opportunities. From family-run corner shops to multi-level malls, and from unique, handmade souvenirs by local artists to the latest fashions from New York, Austin has shopping to suit most any tastes, budgets, and needs.

Watch a video about the shopping malls in and near Austin:


Below is a list of some of the most popular Austin shopping areas.

The Drag is the name for a section of Guadalupe St. that borders the University of Texas campus. Because it is close to prominent areas of the university, such as the Main Building and Union Building, the Drag is popular among students who use it as their major shopping and dining district. The Drag began in fact with a collection of bookstores, restaurants, and clothing shops that catered to students.

The Drag today still has many businesses that appeal to the 18- to 22-year old set, such as Tower Records, Texadelphia, and Dobie Mall, which is a two-story mall inside a private residence hall for students that has convenience stores, casual and fast food restaurants, and movie rentals.

Besides national chains, the area also has local stores and eateries. The UT Co-op has many university memorabilia and souvenirs. There's also Renaissance Market, an open-air market with art, jewelry, and clothing.

Read more about The Drag

The Warehouse District is an approximately six block by six block area between Third St. and Sixth St., west of Congress Ave. It is the retail and nightlife area immediately west of, and more upscale than, the one downtown.

The rundown warehouses that used to be in this area have been converted and now are occupied by stores, restaurants, and entertainment venues. Whereas Sixth Street is known for rowdy college bars, the Warehouse District has more stylish bars and cafes for older, working professionals.

The Austin Music Hall, where the likes of Bonnie Raitt and Eric Clapton have performed is a renovated warehouse in this area. Also in this district is Antone's, a famous nightclub known as Austin's home of the blues, which has hosted B.B. King, Buddy Guy, and many other well-known blues performers.

The Warehouse District is also known as a romantic getaway destination. The Driskill Hotel, a frequent hangout for Austin politicians, is Austin's oldest hotel and its elegant lobby and appointed rooms go back to an earlier time. The Austin InterContinental Hotel was renovated in 2000. It is a popular place for government and business people to relax after work and also has beautifully and well-furnished rooms.

Watch a short video about the Warehouse District:

Austin's Second Street District includes a three-block area just north of the river, between 2nd and 3rd St. and between San Antonio St. and Colorado St. Within this small are are more than 50 specialty boutiques, restaurants, and service businesses, most of which are locally owned. There are a wide variety of retailers, as well as bars, restaurants, live music venues, and hotels.

The district is also known for its dining options, including Mexican restaurants Cantina Laredo and Malaga Tapas, casual eateries like Austin Java, and vegetarian restaurant Leaf. Live performances and music are in the district also at the Moody Theater and Malverde restaurant and bar. 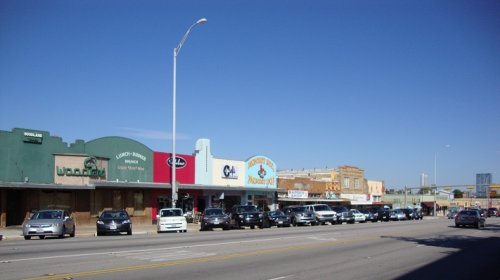 South Congress Ave., from the lake to Ben White Blvd., is a famous shopping and dining district that epitomizes Austin's casual, funky, and slightly quirky atmosphere. Known simply as SoCo, the South Congress area is a tourist destination as well as a popular local hangout.

The reputation of SoCo has spread far beyond the city. Nationally known celebrity chef Rachael Ray is a regular Austin visitor, and some of her favorite shopping and dining establishments are on South Congress.

Another SoCo landmark is Allen's Boots, opened in 1977, readily identifiable by the big red boot above the roof. Inside, you'll find an unrivalled selection of western boots. Maya Star is considered one of the best boutiques in the city, featuring a regularly changing inventory of apparel, accessories, and jewelry by independent artisans around the world. Feathers Boutique is a place to go for low-cost vintage dresses, shoes, jewelry, and other items. Uncommon Objects is an antiques store with many oddities.

Besides shopping, SoCo is also a well-known place for great dining and entertainment, the location of Home Slice Pizza and the Continental Club, among other popular establishments.

Be sure to visit SoCo on the first Thursday evening of each month, when the area turns into a giant block party. Many shops are open late, and have special sales and offers, and live entertainment.

View a slideshow of some SoCo businesses 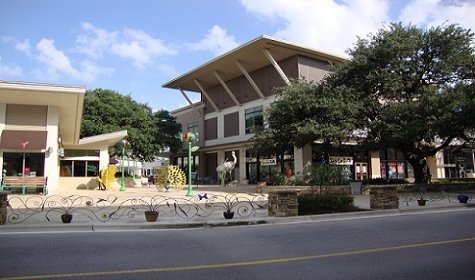 The Domain is an upscale retail, business, and residential area on the north side of Austin. The Domain was built on 303 acres originally owned by IBM and partly occupied by manufacturing and administrative buildings. The complex includes an outdoor shopping mall, restaurants, and high-end apartments and condos.

The first phase of construction was completed in 2007 and comprised 700,000 square feet. Stores currently in The Domain include Neiman Marcus, Macy's and Dillard's, as well as Tiffany & Co., Burberry, an Apple Store, and a Microsoft store. Restaurants include California Pizza Kitchen, McCormick & Schmick's, and Kona Grill. There is also a Westin hotel.

The Domain is currently about 20 percent complete. Upon completion, The Domain will encompass eight million square feet of mixed-use space. Future plans include adding a cinema, a Saks Fifth Avenue, a Nordstrom, and a Whole Foods.

Atop many of the stores are luxury apartments and condominiums. The Domain is in a pleasant, easily accessible part of town, with parks and jogging trails and is close to Austin's northwest high-tech area.

Read about apartments at The Domain

Shops at Arbor Walk is an outdoor mall located in north Austin at the intersection of N. MoPac Expressway and Braker Lane. The shopping center has multiple entrances facing MoPac and Braker Ln.

Directly across from The Domain shopping center, this open-air mall serves the north Austin residential communities.

It has over 30 stores including Home Depot, Marshalls, Sam Moon, Natural Grocers, DSW Shoe Warehouse and JoAnn Fabrics. There are also several dining options including sit down restaurants such as BJ's Brewhouse and Lupe Tortilla. There are casual eateries also including Potbelly Sandwich Works and Mighty Fine Burgers.


The Arboretum At Great Hills 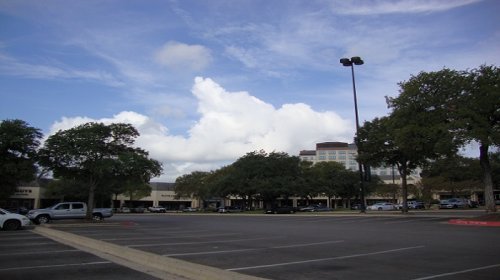 The Arboretum is an outdoor mall that includes stores, restaurants, a cinema, and a Renaissance Hotel. It is in a wooded, hilly area just off of Loop 360 and Research Blvd. The area is close to Austin's high-tech northwest area and also close to the parks and golf courses of west Austin.

The Arboretum also includes office space in glass-walled buildings that offer a nice view of the hills and the river.

The atmosphere of the Arboretum area is youthful and vibrant, which is not surprising since it is close to the high-tech companies in the area that employ many younger engineers and software developers. The mall is also popular with tourists and includes stores, boutiques, and professional services.

Major chain retailers include Pottery Barn, Sunglass Hut, and Barnes and Noble. Restaurants include TGI Fridays, the Cheesecake Factory, Elevation Burger, and Amy's Ice Cream. There is also a smaller mall across Research Blvd. that includes Saks Fifth Avenue and Crate and Barrel.

The Arboretum also includes residential areas with single family homes, apartments, and condos. In the neighborhood is the Great Hills Country Club which offers an 18-hole regulation length golf course in the Arboretum. The Bull Creek District Park is nearby and has hike-and-bike trails, picnic tables, a volley ball court and a creek for swimming.

The development project was awarded Best Retail Project in 2008 and 2011 by the Austin Business Journal Commercial Real Estate Awards. The center was built in a park environment that included the construction of several ponds and 2 1/2 miles of walking/jogging trails, including an exterior loop encompassing the entire development.

The development was designed to minimize impact on the local environment.Benches and pagodas are located along the trail system for public use.

Opened in 1980 in southwest Austin, Barton Creek Square Mall is the largest mall in Austin with over 180 retailers. The mall includes department stores, local specialty boutiques, a cinema, and a food court. The major department stores include Dillard's, Macy's, Nordstrom, JC Penney, and Sears. Other retailers include an Apple Store, Forever 21, Sephora, and Pottery Barn Kids.

Located on Airport Blvd. just north of downtown, Highland Mall was Austin's first suburban mall and was once a premier shopping center in town. Recently, however, it has been overtaken by newer retail developments, and many of the stores have closed their locations in the mall. Austin Community College now owns the property. Highland Mall is still the major mall closest to the east Austin communities. The mall will remain open until the remaining tenants' leases expire; sometime afterward it will likely be replaced with college offices and buildings.

Just off I-35 in south Austin, Southpark Meadows is a retail/dining/residential center with around 200 stores and restaurants, a cinema, a luxury apartment complex, and a master planned housing area. Stores include Walmart, Super Target, Best Buy, and Ashley Furniture. The shopping center is conveniently located to serve the south and southeast Austin communities.

Although actually northeast of the city, Round Rock Premium Outlets is a popular shopping destination for the Austin community. With 125 outlets on 430,000 square feet, Round Rock Premium Outlets is an upscale outlet mall where you can get discount prices for high-end retailers like Ann Taylor, Banana Republic, Brooks Brothers, Burberry, Calvin Klein, Coach, Converse, J. Crew, Michael Kors, Nike, Polo Ralph Lauren, and Tommy Hilfiger.

The San Marcos Outlet Malls are one of the top tourist destinations in Texas and during peak shopping times, such as Black Friday and Christmas, visitors can triple the population of San Marcos. Over six million people visit these malls annually. ABC's The View in 2006 named the Premium Outlets the third-best place to shop in the world, next to New York and Dubai.

Watch a video about the Premium Outlets:

Watch a video about the Tanger Outlets: