With just about 800,000 people, Austin is the fourth largest city in Texas and the fourteenth largest in the United States. Combined with its neighbors to the north and south, the city consistently appears on lists of the best cities to move to and best places to retire. Austin is considered a very livable city, based on amenities, cost of living, housing, crime rate, and other factors.

Furthermore, Austin's future is very bright: in 2010 Kiplinger ranked it the best city for the next decade and The Street, a leading financial news website, named Austin one of the U.S. cities poised for greatness.

The word is apparently getting around: Austin's population grew 48 percent in the 1990s, and has been approximately doubling every decade since 2000.

Austin is located in central Texas, at the boundary between the Texas Hill Country and the prairies of East Texas. Austin has abundant greenery and forestation with lakes and streams, and is surrounded by state parks.

Despite the rapid development accompanying its population growth, Austin has an influential environmentalist movement and is committed to preserving its natural beauty.

The map below shows the location of Austin relative to other Texas cities: 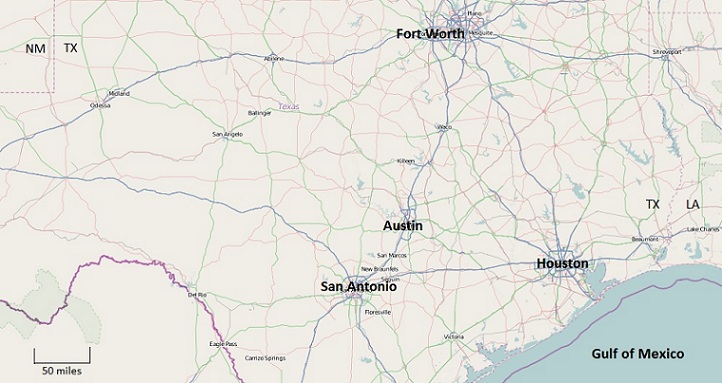 With a population median age of 31, Austin is a youthful, vibrant community with an active event calendar and nightlife. Many of Austin's people are dedicated fitness enthusiasts, and athletic events are held on weekends throughout the year. Many are also socially aware and strong on volunteerism: there is an abundance of community service organizations in and around the city, serving local, regional, and global issues.

There is also active support of the arts and film, and over 200 live music venues. Thousands flock to Austin each year from all over the world for South By Southwest, a week-long display of music, film, business, technology, and social issues held each spring, and Austin City Limits, a three-day festival of live music held each fall.

Another bit of Austin city info that's good to know: Austin is well-known for its support of freedom of expression. This is evidenced by such unique Austin icons as the late Leslie Cochran, Austin's most famous homeless transvestite; Hippie Hollow, the only clothing-optional park in Texas; Eeyore's Birthday, celebrated every year since 1963 on the last Saturday in April with food, music, drum circles, and some nudity; and the Cathedral of Junk, a 60-ton junk pile assembled since 1988 in someone's backyard. In Austin they don't just tolerate individualism and quirkiness, they celebrate it.

This extends even to the political arena: recent candidates for Texas governor included Kinky Friedman and a lady calling herself "one tough grandma". Leslie Cochran ran for Austin mayor a number of times and received over seven percent of the vote.

As Austin grows into a world-class city, there's concern in some quarters that it's losing its weirdness. But rest assured that Austin retains its many attractive features.

Overall, what attracts many people to Austin are likely the same things that caught your attention: the high quality of life, low cost of living, favorable employment prospects, relatively mild climate, and active music and arts scene.

Some Austin city info that's good to know if you’re thinking of starting a business: Austin has a very favorable business climate. Many small companies are formed here and larger companies are making their headquarters in Austin.

The low tax structure, educated workforce, availability of investment funds and business advice, and collaborative spirit between the government, businesses, and universities add up to create a very business-friendly environment.

Now that you have a little background about our city, you can use the links at the top left to get more Austin city info about a specific topic. You might also watch the videos below which showcase some Austin highlights.

Afterwards, read on to see an answer to a question that’s frequently asked.

How To Make the Most of a Brief Visit

A question we often hear is, “I’ll be in Austin for a day (or a few hours). How can I use that time to see whether the city is right for me?”

Our suggestion: first, plan your visit before you arrive. Get familiar with the city by perusing this site and the sites recommended here.

If you know where you’ll be working, we strongly recommend you live close to that location. Otherwise, slogging through the infamous Austin traffic on a daily basis will quickly wear you down.

Use the Austin Home Search Guide to find out about the main geographical areas of the city.

Or visit the Austin Neighborhoods Page to learn about some of the neighborhoods. Check out the real estate or apartments in those neighborhoods, crime statistics, and restaurants and events nearby. If you have kids, also check out the quality of the schools.

Scope Out the Neighborhood

How is the proximity to the grocery stores, banks, hospitals, doctor’s offices, schools, restaurants, theaters, parks, and whatever else is important to you?

Finally, if you have time during the day, visit the helpful folks at the Texas State Capitol Visitors Center. There, you’ll find maps, guidebooks, brochures, and a wealth of information about Austin and Texas in general, all for free. The staff is very knowledgeable and accessible. There’s also a gift shop so you can pick up some souvenirs while you’re there.

Just visiting our fine city? Get a few tips from one recent visitor after her weekend here. She talks about the BBQ, the food trailers, Sixth Street, and more.


Some little known facts about Austin

Austin has regularly been named among the drunkest cities in the U.S., based on the number of drinks per month per adult and the percentage of residents who are binge drinkers and heavy drinkers. In 2012, Austin was the fifth drunkest city in the nation, beating out New Orleans and Las Vegas. In 2008, Austin was #1 on the list.

Austin was once home to the nation's most elaborate Halloween haunted house. Bitannia Manor, on a hill outside Austin, is the residence of Ultima game designer Richard Garriott. Every two years from 1988 to 1994, Garriott spent a large sum and enlisted a mostly-volunteer crew of actors and techs to make the estate into an elaborate, interactive haunted house. Invitations were usually given away free and people camped in front of his house for as long as two weeks for a chance to get an invitation.

Austin is the only city in the U.S. with a set of moon towers. Built in the late 1800s as a way of lighting the city in place of regular streetlights, moon towers were once a popular urban lighting system around the country. Of 31 original moon towers built in Austin, 17 remain.

In Austin it is illegal to have wire-cutters in your pocket. This law is a holdover from the days when renegade cowboys would cut barbed-wire fences that didn't belong to them. Some other strange-sounding laws remain on the books. It is illegal in Texas to shoot at bison from a second story window of a hotel.

America's oldest verified living military veteran resides in Austin. Richard Overton, who saw action in the South Pacific during World War II, celebrated his 108th birthday in 2014. Overton still lives in the east Austin house he purchased in 1945 for $4,000. He still drives his own car, and mows and takes care of the lawn.