The Texas State Capitol is the home of the Texas Legislature and a must-see attraction in Austin. The 311-foot high dome-capped building occupies a central place in downtown Austin.

Situated atop one of the highest points in the city, the building has a sweeping view of the commercial district on one side and the Colorado River on the other.

Watch a video about the Texas State Capitol:


Click here to learn more about the capitol, parking, visiting hours, and get maps.

While you're visiting the capitol, be sure to stop in at the Capitol Visitors Center. It's a great place to pick up travel brochures and literature about Austin and central Texas, and shop for Texas gifts and souvenirs.


More about the Texas State Capitol:

Completed in 1888, the building is based on the Renaissance Revival architectural style dating from 15th Century Italy. It was modeled after the U.S. Capitol in Washington, D.C. although it rises some 15 feet higher than the national capitol.

Largest state capitol in the U.S.

In keeping with the "everything's big in Texas" motif, the Texas Capitol building, at 360,000 square feet, is the largest in size of all state capitols.

The distinctive rust-colored exterior walls are made of "sunset red" local Texas granite obtained from Marble Falls, about 50 miles west of the capitol site. Although the original plan called for ornately carved local limestone to be used, the limestone was found to have a high iron content that caused discoloration.

The cost of construction in 1888 was $3.7 million. The state paid most of that by a donation of some three million acres of land in the Texas Panhandle that would later become the famous XIT Ranch, the largest cattle ranch in the world. 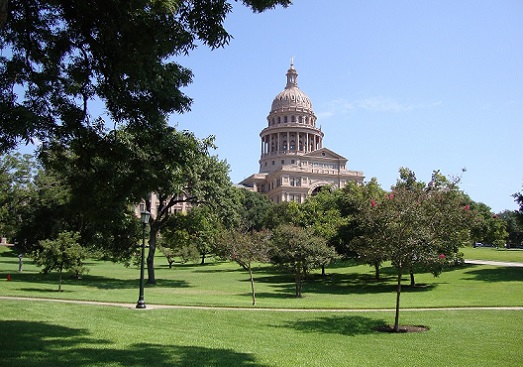 Like the U.S. Capitol, the state capitol building has a statue of the Goddess of Liberty on top of the dome. In 1993, a fire badly damaged the east wing of the capitol and prompted a major restoration project for the entire building.

The original zinc statue, by then very weathered and degraded, was removed by helicopter and replaced with an identical aluminum one. The restoration of the capitol was finished in early 1995, and the structure was re-dedicated on April 21, 1995.

Sited on 22 acres of native trees and plants

The grounds immediately surrounding the capitol comprise some 22 acres. In the 1850s, the capitol grounds contained only sparse native vegetation, wildflowers, and some trees. Residents used the area for recreation, making it one of the first state parks.

Starting in the late 1800s, the state invested significant funds in developing the capitol grounds. Landscaping of the grounds was begun in 1874, including planting of evergreen and "shade trees" and shrubbery. 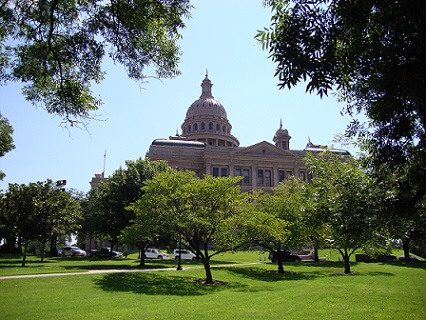 After the building was completed in 1888, an elaborate landscaping plan was developed and implemented. Completed in 1890, this plan included the majestic walk lined with elm trees on the capitol front grounds, the curved carriage drives with limestone curbs, and the iron fence enclosing the grounds, features that remain to this day.

At the turn of the Twentieth Century, the City Beautiful movement, a nationwide campaign to beautify American cities, resulted in hundreds of new elm and pecan trees being planted on the grounds. Some of the trees have been planted by resolution of the State Legislature to commemorate historic events or honor prominent Texans. 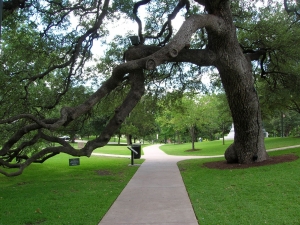 The capitol is recognized as one of the most distinctive state capitols in the nation. It was placed on the National Register of Historic Places in 1970 and designated a National Historic Landmark in 1986 for its "significant contribution to American history."

The Texas State Capitol was ranked ninety-second in a 2007 poll by the American Institute of Architects that ranked the top 150 architectural projects in America. In a 2008 poll by the AIA, it was ranked the number one state capitol.

The State Preservation Board was formed by state legislation in 1983 to oversee the preservation and maintenance of the capitol, associated buildings, and grounds.

The board also oversees the Bullock State History Museum.

Visit the State Preservation Board website to learn more about the capitol, parking, hours, and to plan your visit.

Also be sure to visit the Capitol Visitors Center website.

The visitors center is an attraction in itself. The friendly staff can answer questions about the capitol, associated buildings, and grounds.

They can also provide extensive travel brochures, booklets, and literature for sightseeing around Austin and central Texas. There's also a gift shop where you can pick up unique Texas souvenirs.

Watch a video tour of the Texas State Capitol: