The infamous Austin traffic, like the infamous Austin summertime heat, is really as bad as you may have heard. Austin's traffic is rated among the worst in the U.S., on a par with New York, San Francisco, and Los Angeles.

In fact, Austin is one of the worst cities for traffic in the western hemisphere.

An Austin commuter with a 30-minute trip to work will endure 83 hours of traffic delays each year. During rush hour, traffic delays add about 34 minutes to a one-hour trip. Add in rain, sleet, an accident, or a race or other event, and you can easily double that estimate.

The worst areas during peak traffic times are on I-35 or MoPac near downtown; southwest near MoPac and Hwy. 290, on I-35 south of Hwy. 290, and northwest on Hwy. 183. These areas are circled in red on the map below.

You could take the toll roads, such as Hwy. 45 which passes about eight miles east of downtown, as shown below. 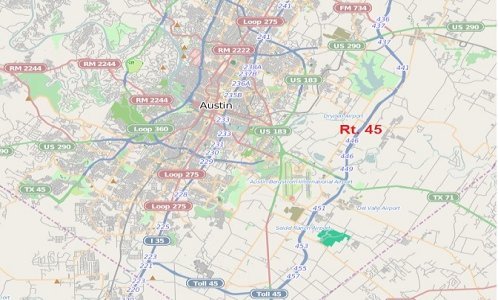 But then you'd be paying a toll for the privilege of adding 15 miles or so to your trip.

The notorious Austin traffic is why we recommend you live close to work if possible, unless your work schedule permits you to work at home or avoid commuting during peak traffic times. Slogging through rush-hour traffic in the 100 plus-degree summer heat will wear you out.

Some successful professionals who work downtown have traded in their dream homes in the hill country for an apartment or condo downtown, paying $5K per month for a five-minute trip to work.

Why Is the Traffic So Bad?

Some point the finger at infrastructure planners. A report by NPR says that city planners failed to properly plan for population growth during the last few decades. Austin is the largest city in the U.S. with only one Interstate passing through it.

The city has recently taken some steps to address the problem, such as building toll roads like Hwy. 45 and 130. But as we touched on earlier, these roads go so far out of the way that few people use them.

As more people continue to migrate to central Texas, the problem will get much worse. According to a study by the Texas A&M Transportation Institute, by 2035 it will routinely take two to four hours to travel up or down I-35. Some commuters will not arrive home until 10 p.m.

The study recommended aggressive action to alleviate the traffic problem, including allowing significantly more workers and students to work at home, increase online shopping to reduce retail trips, and increase use of carpooling and public transportation.

But all of these solutions will take time to fully implement, and city officials are only now beginning to address the issue. For the time being, we suggest you live close to work or school if possible - or get used to getting home later.

The three maps below show estimated driving times between various locations around Austin, during morning rush hour, during evening rush hour, and during non-rush hour times.

How to use the maps: Each marker designates a location in or around town. Click on a marker. The numbers that appear on the other markers are estimated driving times (in minutes) to the other locations from the location you selected.

You can view the near-real-time traffic situation at the Sigalert Traffic Map. (Right-click on the map to see driving times between various locations.)